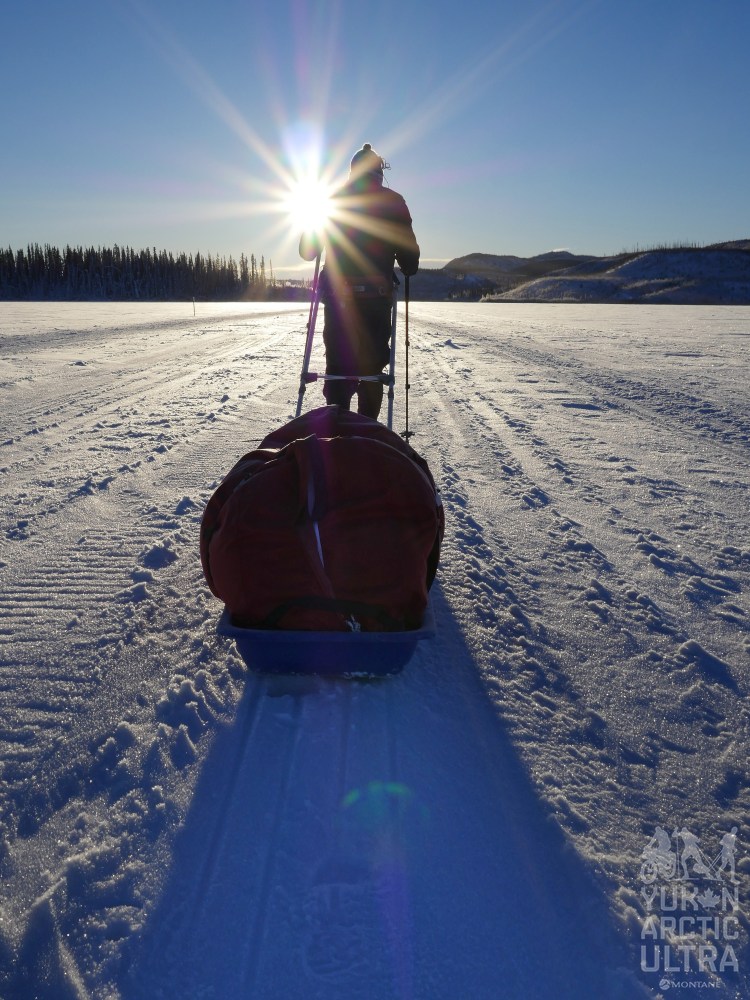 Five months of training, physically and mentally for the Yukon Arctic Ultra was an excellent journey and at times quite a challenging journey. But the reasons are quite simple, you can never be too prepared for what hostile, arctic environments can throw at you. There’s a saying in the Marines called the 6 P’s – Pre Preparation Prevents Piss Poor Performance – and is one that I have always followed over the years and also bear in mind when training any of my clients in TLA Fitness.

Getting to the start line felt great on the 1st February 2018. 22 athletes started the 300 mile arctic foot race in what were extremely harsh conditions, even by Yukon standards. Temperatures on the rivers dropped to -40’s and -50’s. Being aware of these extreme conditions, I had to make sure my body was always regulating good heat and temperature control to withstand the conditions. Every two hours I would stop, drink, eat, adjust kit if needs be and move swiftly on. It was clear that the temperatures were affecting many people as they were dropping like flies around me and exiting the race, many of which were exiting due to the onset of frost-nip and frostbite which very quickly set in. Some athletes caught it early and put their hands up and immediately withdrew and some athletes unfortunately left it a bit too late and were not so fortunate in that the frostbite had set in and the pictures I saw after the race of peoples fingers and toes were that of a one line horror story – black and blue with fingers swollen five times the size they should be.

Upon leaving the first checkpoint, my left hip flexor was becoming painful, particularly on ascents and descents. On my next routine stop I shook out, ate, drank and pushed on into the night. My race plan was to continue throughout the night but instead, one of the guys I was speed marching with was bitterly cold, so I bivied down with him, lit a fire and got a few hours rest. When we woke, we stoked up the fire, had a brew and pushed on to the next checkpoint. Unfortunately my hip flexor was giving me a lot of grief at this stage and my ascents and decents become slower and slower to the point where a snail could’ve beaten me uphill. The physical pain in my hip started to immediately ring alarm bells in that I was at the beginning of this race and I had a very long way to go. I started to question whether or not I could continue, however after some quiet talks with myself, I pushed on.

Day 2 – the sun came up, it was midmorning and the temperatures were about -45. Now I was completely on my own with various athletes infront and behind but there were a lot less athletes in the race at this stage due to 75% of the field already withdrawn. I continued sticking with my race plan and stopping every two hours to fuel up and hydrate. The trail came off the Yukon and up through a hilly wooded section and it was at this stage I could no longer weight bare on my left leg. I tried to push on through the pain but it started to deepen and having already travelled 15miles on there was no letting off. It started becoming stiff and my muscles were starting to tighten and close up and go in to protection mode. This is when the demons set in and it became pretty apparent that I wasn’t going to go on any longer. Disappointment flooded through me and the whole onset of ‘could I?’ or ‘what if?’ started to kick in and not to mention the reality of how many questions I would get asked in the coming weeks! Hence why I felt it was sensible to write this. When taking part in these extreme events, you have to be aware that there are extreme outcomes and you have to be prepared for whatever the outcome whether it be successful or not. Now looking back, I am obviously disappointed in some respects but my overall race was a strong one. I was not suffering with the cold, my injuries were not cold weather related, I felt in control in the environment I was in and so I have to look back with my head held high and look forward to the next event! It’s very easy to get knocked down but finding a way to lift yourself again by focusing on the positive aspects of the race is an essential part of any type of event, no matter how big or small.

Out of 22 athletes that started the Yukon Arctic Ultra 2018, only one athlete competed the race. The race was ended at the penultimate checkpoint due to the harsh conditions but he was rightly awarded the finishers medal.